Listening to the parable about an Unforgiving Servant, we usually assume the servant to be so self-obsessed, so narrowly focused on his well-being, that he just didn't notice the hypocrisy. He may have also considered the King a senile fool, too kind for his own good.  Certainly, there’s not a lack of these kinds of people in the world. But I always thought there’s a different reading possible. What if the behavior of the Servant is directly connected to the encounter with the Good King? 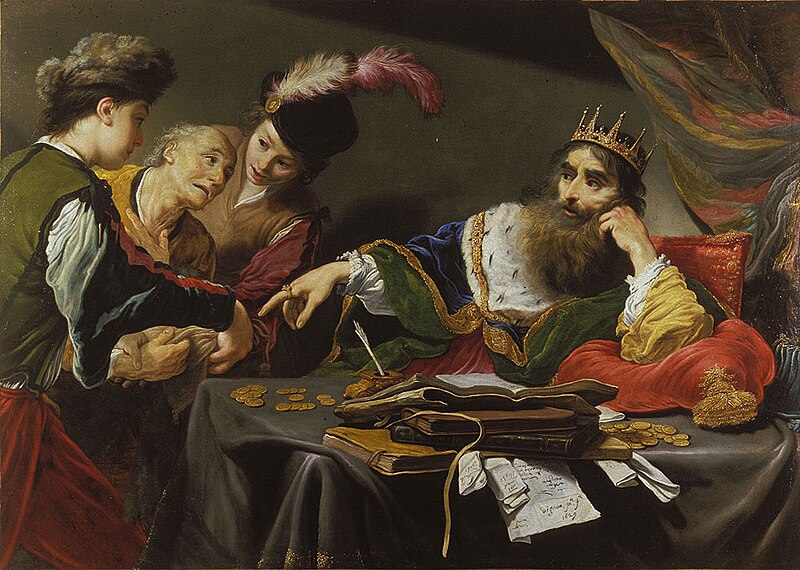 Croesus Receiving a Tribute from a Lydian Peasant, 1629

"That is why the kingdom of heaven may be likened to a king who decided to settle accounts with his servants. When he began the accounting, a debtor was brought before him who owed him a huge amount. "

The amount of forgiven debt is described to be outlandish, just ridiculously enormous. In other translations we have a precise number: ten thousand talents. My “Ignatius Catholic Study Bible” says that a talent was equal to 6000 denarii. Denarius was a day’s payment of a laborer, which I assume was minimum wage, but still.  So, he owed 10 thousand times 20 years’ minimum wage.  What could have he spent it on? Food? Was he feeding a city for free for years? Property? Well, that could be sold then, and there would be no need for the enslavement of the whole family.  Now, all the commentaries emphasize that Jesus exaggerated for effect. But still, let’s speculate. In today's world at least I'd guess it was a failed business. If you know anything about trying to do business, you know that the temptation to borrow and go bigger than you can afford,  to overpromise and to spend future earnings today is enormous. You miscalculate here and there, lose profits a couple of times, borrow money to pay the employees, take out a second mortgage… Sooner than you know it, you owe more money than you have ever seen…  Big things fail big.

The Parable of the Unmerciful Servant by Barent Fabritius

Therefore, I have an image of this man trying to achieve success in the field of business: commerce? hospitality? land development? All of these? Anyway, trying and failing.  Probably, several times. It could’ve been his fault and maybe it wasn't.  He might have been a very hardworking guy, only the market was against him. He was possibly outcompeted by someone who found cheaper labor, or he met some dishonest people, or the quarantine happened and the whole industry shut down.  He borrowed more to give back the old debts, the percentage kept growing, collectors were selling his debts to each other, until finally the King bought all of them. It got quiet for a while, it almost seemed like all would work out. But then something else happened, and his castles in the air went tumbling down.

And now, out of nowhere, the King demands his money back. Not that it's unfair. The servant owes them. But the King was patient for so long that the servant started to think he forgot.  Or the documents were lost. But no. The time has come. He is brought to the court. Imagine the shame! He is threatened with his whole family being enslaved! In front of his colleagues, too! That only happens to lazy careless people. But he, he worked so hard! He begs (oh horror! oh shame!). And the King says it's ok. But is it really? It's ok for now. But he owes the King, and that is going to be hanging over him for the rest of his life. Basically, the King owns him and his family and everything he ever achieves.  He is not the one to count much on the kindness of kings.

As he is walking home, his heart is brooding over the failure, the shame and perceived humiliation.  We, people, cannot go on blaming ourselves for too long. Naturally, his mind starts to look for others who are at fault. His employees? Contractors? Partners? He realizes that he has been too kind. He forgave too much to too many people who took advantage of him. He forgets all the times he lost money because of his own wrong choices, mistakes or risky behavior.  He only remembers all the times he trusted and was taken advantage of, was stolen from. Little and big losses - it all adds up! Not surprisingly, when he sees his fellow servant - it's not about the debt, it's about the principle. He is so angry - not so much for this small debt, but for all the debts over the years, all the losses, mistakes and tricks. But it ends now! He just can’t afford this to happen again, to be called to a king like that. He will be at loss no more, humiliated no more… forgiven no more.

What if he is like many of us, good Christians? We struggle with sin so much and fail. We strive to perfection but fall short every time. Others don't seem to care about their transgressions, but our conscience drags us to the court before the King every time.  We hear the words of forgiveness but all we feel is shame.  And gradually we grow so tired. It can't be just our fault. We remember all the times we were hurt. It's our parents' fault for not loving us well.  It's the catholic schools' fault because they haven’t taught us right. It's the priests, the bishops, the Pope's fault. And we may even be right. We do have a duty to point out the sins of our brothers or elders. Jesus actually explained how to properly do it like five minutes ago. But that’s not what we do. The way we do it is often by metaphorically grabbing them by the throat rather than offering charity. Is it because we forgot how much we were forgiven, or because we are just too well aware of that?  Maybe, we are too tired of needing forgiveness, of owing everything to the King. We don't really believe forgiveness is full. We are trying to earn it, still waiting for the payback moment.

We have the eyes yet do not see, we have ears yet only hear ourselves.  We proclaim his death and do not believe.

There's nothing bigger than the King's kindness.  There's no safer way to live than by owing everything including your very soul to Him. The King has bought our debt and paid it in full. We are His no matter what. So are our brothers. Because He has paid their debt too. He can love me for all the betrayals I suffered, He can heal all the wounds. I don’t need to go to my debtors and scrap by scrap try to collect anything because there will never be enough.  Everything is redeemed.

I can’t be unforgiving if I truly, deeply know that I am Forgiven.