He Has Risen in Secret

This year’s Lent turned out to be different. The whole world, country after country, continent after continent descended into darkness that was unthinkable even a couple months ago. It’s a darkness of fear, of disease, of death, of uncertainty, of loneliness like we have never known before, of unemployment, economic struggle and of despair. Even those who haven’t been hit by the disease, are still affected by economic ramifications and by isolation.

Experiencing loss of hope, we can better understand apostles during the Holy Week. Everything was going well, until it wasn’t. Their Teacher’s words were more and more ominous, the danger became more real, yet it still seemed impossible that something truly bad would happen. I think that’s why in the readings we hear all of the apostles being so confident about dying for Jesus. The threat of death was still quite abstract. They were not afraid to die in theory. But very soon the reality kicked in. It became very dark very quickly, and they lost hope. They were lost and scattered, uncertain, doubtful and afraid. What was going to happen now? What does it mean that their teacher is crucified?

Unlike them, we already know the ending of the story. We know the Holy Week closes with Resurrection. Church gives us an image of the Light of Truth shining brightly in the darkness. Eastern Catholics and Orthodox sing on Easter: 'Christ has risen from the dead: by death he has trampled on death, and to those in the graves given life'. We are taught that we are also those who are in graves of sin. Maybe this year we feel this reality a little deeper than usual. We know that nothing is going to magically become better immediately after Easter. We will still be alone in our houses, churches will still be closed. But in Jesus’s times the change was not immediate, either. True resurrection happened at night in secret. And on Sunday morning women were still crying for Jesus, even though He lived again. Disciples walking to Emmaus were going to remain unconsoled for many days, even as the Easter has already happened! High priests and Roman authorities thought the thing solved and themselves victorious for months after! But it didn’t change the truth of the reality: Jesus has risen, and death has been trampled. 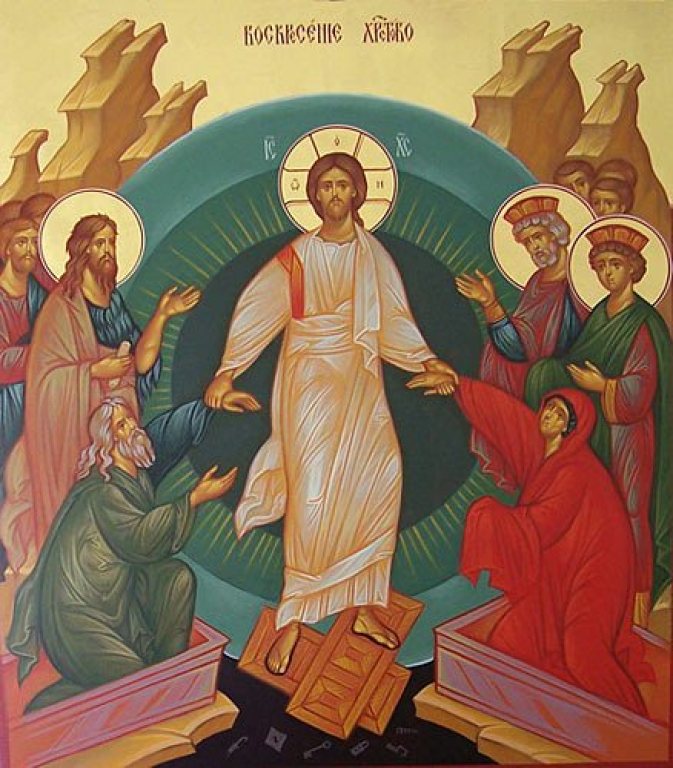 Today, we know that behind the closed doors of churches, in isolated families and homes, in the lonely rooms of our hearts - Christ has really risen! His victory over Death has been won many centuries ago - even if Death doesn’t know it yet.

So let us Rejoice, even as we continue self-isolation - because we know the secret! Life has been victorious! Christ has risen!