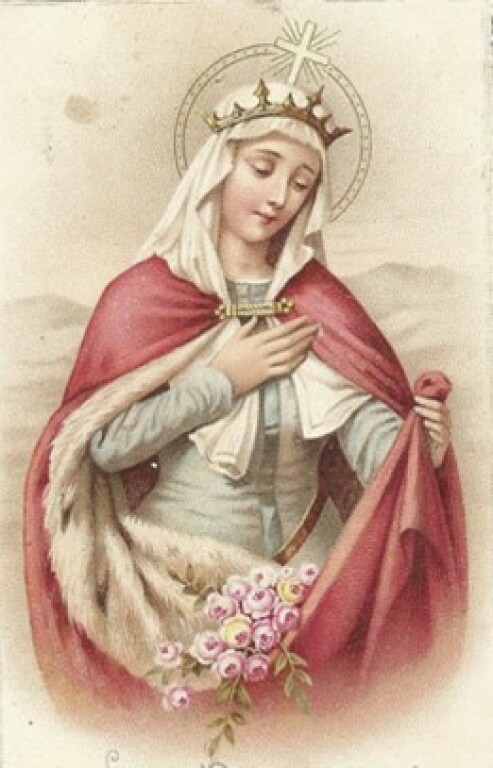 St. Elizabeth was born to Peter III of Aragon and his queen Constantia in 1271. Like most royal girls of the time, she was betrothed at an early age, and was married to King Diniz (or Dinis, English: Denis) at the age of 12. Although her husband’s infidelities and life of sin caused much scandal, Elizabeth was a good and pius queen. She attended Mass daily and dedicated her life to helping the poor. She established orphanages and shelters for the homeless. She also founded a convent of Poor Clares at Coimbra, Portugal.

Often called Peacemaker, Elizabeth was from her birth a reconciler of conflict. Her birth brought her father and his estranged father James to peace. Later when her own son and husband came to war out of jealousy, she rode between armies and reconciled the two men.

After King Diniz died in 1325, she went to live as a lay member at the convent of Poor Clares that she had founded. But her fight for peace was not over, she undertook a long ride to keep the army of her son Afonso IV, from fighting that of Alfonso XI of Castile. Although she was successful, she died shortly after from a fever.

Saint Elizabeth was canonized on May 25th, 1625, by Pope Urban VIII. In the United States her memorial has been transferred to July 5th since July 4th is Independence Day, a national holiday.