The Church sets up saints as inspiration and example to us. Far from being spiritual superhumans, they should be regarded as our older brothers and sisters who have already walked the walk or, as St. Paul writes to Timothy, fought the good fight, finished the race and kept the faith. Looking at their life should help us follow in their footsteps but ultimatelly in the footsteps of Christ

Lessons we learn from Saint Leo the Great

Today the Church remembers Saint Leo the Great, a 5th century Pope. Saint Leo lived in the times when Attila the Hun was bringing fear to Europe, in the world were Rome has just been sacked by Goths. All the major splits of the church were yet to happen. He became the Pope ten years after the death of Saint Augustine. This temporal distance may make it hard for us to relate to him, and – what’s more important – to use his life and teaching to form us.

“You were the Church's instrument in strengthening the teaching of true doctrine;

you shone forth from the West like a sun dispelling the errors of the heretics.

The importance of teaching true doctrine is a major feature of Pope Leo and his sainthood. In our rather practical age we sometimes find the theory boring and unimportant, but Pope Leo along with other church fathers understood very well that what you believe in defines how you act. They struggled for the purity of faith because they were aware of the danger of leading “the smaller ones” astray.

Therefore, I decided to look at two of the main heresies that Pope Leo the Great had to deal with, and see if we still have something to learn from them.

Pelagius debated St. Augustine, and pelagianism as a heresy was condemned in 418 at Council of Carthage, so a little before Pope Leo’s time. But he had to deal with some of the pelagianists returning to the Church, and he was very insistent they renounced their old convictions. What was then so wrong with this teaching?

Now, Pelagius may have had the best intentions. It seems like he felt that some Christians have very lax moral standards. He was convinced and rightfully so, that every Christian is called to high moral standards, and not just clergy. Consider this quote from one of his writings:

“Whenever I am called upon to speak upon moral training and the course of holy living, I am accustomed first to display the power and quality of human nature and show what it is able to accomplish, and then from this to incite the mind of the hearer to (some) forms of virtue, lest it profit nothing to summon to those things which it would have thought to be impossible for it.”

It sounds quite empowering! You can probably hear it from a decent self-help speaker today. So why were the Church fathers so upset?

Pelagius denied the concept of original sin. He thought that a human soul is born with equal capacity to do good or evil, and it is all a question of free will. Adam’s sin did not cause death for all of us, as Paul says in 1 Corinthians, chapter 15. The only problem with what he did was basically that he set us all a bad example.

If you go back to the example quoted above, you may notice something important that’s missing: the grace of God. Pelagius certainly thought that grace of God was helpful, but it doesn’t seem all that essential in his teaching. Basically, he is calling for us to be self-made saints. 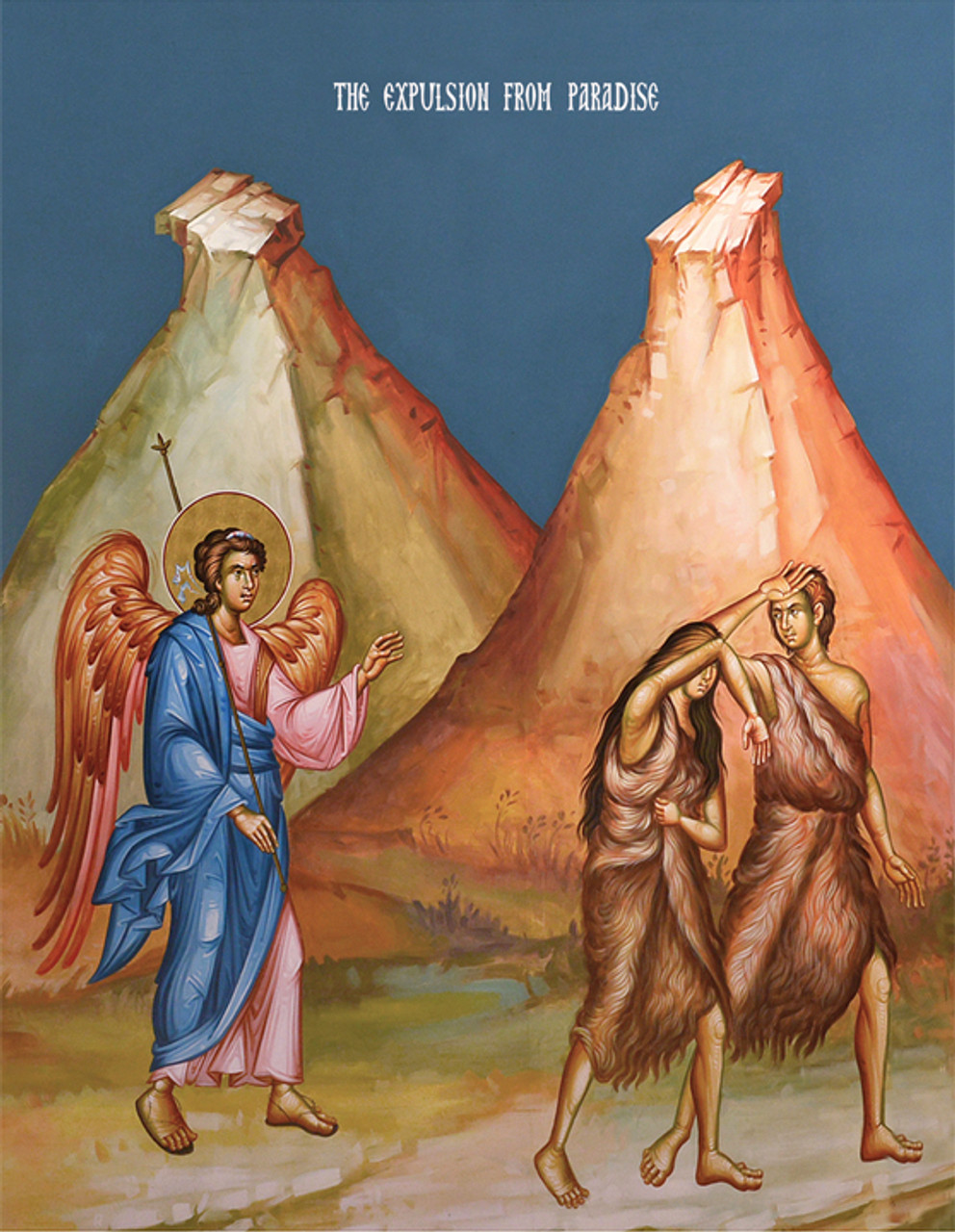 The Catechism of the Catholic Church teaches clearly the doctrine of original sin in the Article 1 on profession of Faith. It refers to Paul’s juxtaposition of Adam through whose disobedience all were made sinners and Jesus, through whom came the salvation:

“It is a deprivation of original holiness and justice, but human nature has not been totally corrupted: it is wounded in the natural powers proper to it, subject to ignorance, suffering and the dominion of death, and inclined to sin - an inclination to evil that is called concupiscence". Baptism, by imparting the life of Christ's grace, erases original sin and turns a man back towards God, but the consequences for nature, weakened and inclined to evil, persist in man and summon him to spiritual battle.”

While we are still free to choose good and evil, we are deprived of original “holiness and justice”. Our nature is wounded, that is why evil is often so much easier to choose. We still can – with God’s grace – choose to do good, but it often requires heroic effort.

Why is it important to hold such grim reality in our minds?

Even after we have been washed in the waters of baptism, our nature is “weakened and inclined to evil”. It is not just an abstract theory. If we are aware of the truth of original sin, we will be wiser and less surprised by the evil we encounter. At the same time, we will be less judgmental to ourselves and others: we all are wounded people.

That does not mean that we should be lax. Quite the contrary: being aware of our brokenness, we can be more attentive to the movements of our soul that might lead to sin. Instead of expecting our kids naturally to choose good, we will nourish the good inclinations and watch for the negative ones. Confession will be natural, since the failure is expected. Mistakes won’t be opportunities to despair, but chances to know yourself better and to turn around to God

Is this discussion still relevant? I believe so. We don’t call it Pelagianism, but a lot of us are convinced that we can fix ourselves all on our own, that we just need to try harder.

Still others believe we do not need fixing. Self-esteem culture tells us: you are perfect the way you are, you do not need any changing, your every desire is natural and beautiful. Both sides lack the uncomfortable truth about the original sin.

Deep inside we know: of course, I am not perfect the way I am. I may put on a show, but deep in my heart I know that I am not all that I could be. And maybe I try with all my might, and still fail. The solution is accepting my brokenness and learning to look at myself “from God’s respective”.  Paul in Romans 5:8 says “but God shows his love for us in that while we were still sinners, Christ died for us.”. Only in contemplating His sacrifice and the grace that is poured out on us can we find strength to overcome our evil inclinations and follow what’s right.

Pope Leo the Great is mostly known for his elucidating the orthodox definition of Christ's being as the hypostatic union of two natures, divine and human, united in one person, "with neither confusion nor division". It was a major dispute in the church in Leo’s lifetime and later. There were many versions of heresies that disagree with this article of faith. They range from Miaphisicists that believe that though Jesus is fully human and fully divine, yet in one physis (nature) to Docetists, that claimed that Jesus had no human nature, and his physical life was just a phantasm, a vision. It is way beyond the scope of this article and my intellectual ability to analyze all of them. What we should concentrate on is  that the Incarnation – The Word of God becoming Flesh – is a central element of our Faith. Catechism of the Catholic Church refers to Council of Chalcedon, which was held in times of Pope Leo: “Faced with this heresy, the fourth ecumenical council, at Chalcedon in 451, confessed:

Following the holy Fathers, we unanimously teach and confess one and the same Son, our Lord Jesus Christ: the same perfect in divinity and perfect in humanity, the same truly God and truly man, composed of rational soul and body; consubstantial with the Father as to his divinity and consubstantial with us as to his humanity; "like us in all things but sin". He was begotten from the Father before all ages as to his divinity and in these last days, for us and for our salvation, was born as to his humanity of the virgin Mary, the Mother of God.91

We confess that one and the same Christ, Lord, and only-begotten Son, is to be acknowledged in two natures without confusion, change, division or separation. The distinction between the natures was never abolished by their union, but rather the character proper to each of the two natures was preserved as they came together in one person (prosopon) and one hypostasis.

The oldest known icon of Christ Pantocrator at Saint Catherine's Monastery. The two different facial expressions on either side emphasize Christ's dual nature as both divine and human

I believe, this truth of faith is important in our daily life: as we suffer illness, anxiety or loneliness, as we work and share meals with our friends, as we feel tempted, lost or persecuted, it helps to remember that Jesus has experienced everything that is human, except for sin. Whatever is bothering you, he has known it.

Yet at the same time, don’t let anyone tell you He was just one of the prophets, a wise man like Socrates or Buddha.  Christianity only makes sense if Christ is who he says he is - God incarnate. To take our place on the altar for our sins, He needed to be one of us, and yet, to beat death by death He needed to be the Lord of everything.

This also explains why Catholics and Orthodox call Mary Mother of God: if you deny her this title, you are separating the two natures of Christ, you are saying that he wasn’t God in his earthly life.

Hopefully, this small contemplation of mine showed that abstract theological problems of distant past weren’t as abstract and are still relevant and practical. I would like to finish  with few lines from Christmas homily of Saint Leo the Great:

“Christian, remember your dignity, and now that you share in God’s own nature, do not return by sin to your former base condition. Bear in mind who is your head and of whose body you are a member. Do not forget that you have been rescued from the power of darkness and brought into the light of God’s kingdom.

Through the sacrament of baptism you have become a temple of the Holy Spirit. Do not drive away so great a guest by evil conduct and become again a slave to the devil, for your liberty was bought by the blood of Christ.”

Today, let us ask Saint Leo to inspire us to seek the true doctrine and to implement it in our lives. Let us aspire to preserve our true dignity and liberty from sin, bought with such heavy price.