On March 19th we celebrate the Solemnity of Saint Joseph.  The 19th of March was dedicated to Saint Joseph in several Western calendars by the 10th century, and this custom was established in Rome by 1479. Pope Pius V extended its use to the entire Roman Rite by his Apostolic Constitution Quo primum (14 July 1570). Even thopugh the Solemnity always occurs inside Lent on the usual date of March 19, it is still observed as a Solemnity of a Saint- this is one of the few times during Lent the Gloria may be said or sung, the vesture is changed from the purple or violet of Lent to white or gold (as it would be for such a solemnity normally), the Collect and the Eucharistic Prayer's Preface and other prayers are from the Solemnity and not Lent, the hymns are more joyful, and the Creed is said.

As catholic.org notes, everything we know about the husband of Mary and the foster father of Jesus comes from Scripture.

We know he was a carpenter, a working man, for the skeptical Nazarenes ask about Jesus, "Is this not the carpenter's son?" (Matthew 13:55). He wasn't rich for when he took Jesus to the Temple to be circumcised and Mary to be purified he offered the sacrifice of two turtledoves or a pair of pigeons, allowed only for those who could not afford a lamb (Luke 2:24).

Despite his humble work and means, Joseph came from a royal lineage. Luke and Matthew both mark his descent from David, the greatest king of Israel (Matthew 1:1-16 and Luke 3:23-38). Indeed the angel who first tells Joseph about Jesus greets him as "son of David," a royal title used also for Jesus.

We know Joseph was a compassionate, caring man. When he discovered Mary was pregnant after they had been betrothed, he knew the child was not his but was as yet unaware that she was carrying the Son of God. He knew women accused of adultery could be stoned to death, so he resolved to send her away quietly to not expose her to shame or cruelty. However, when an angel came to Joseph in a dream and told him, 20 "Joseph son of David, do not be afraid to take Mary home as your wife, because what is conceived in her is from the Holy Spirit. 21 She will give birth to a son, and you are to give him the name Jesus, because he will save his people from their sins," he did as the angel told him and took Mary as his wife. (Matthew 1:19-25).

When the angel came again to tell him that his family was in danger, he immediately left everything he owned, all his family and friends, and fled to a strange country with his young wife and the baby. He waited in Egypt without question until the angel told him it was safe to go back (Matthew 2:13-23).

We know Joseph loved Jesus. His one concern was for the safety of this child entrusted to him. Not only did he leave his home to protect Jesus, but upon his return settled in the obscure town of Nazareth out of fear for his life. When Jesus stayed in the Temple we are told Joseph (along with Mary) searched with great anxiety for three days for him (Luke 2:48). We also know that Joseph treated Jesus as his own son for over and over the people of Nazareth say of Jesus, "Is this not the son of Joseph?" (Luke 4:22)

We know Joseph respected God. He followed God's commands in handling the situation with Mary and going to Jerusalem to have Jesus circumcised and Mary purified after Jesus' birth. We are told that he took his family to Jerusalem every year for Passover, something that could not have been easy for a working man.

Since Joseph does not appear in Jesus' public life, at his death, or resurrection, many historians believe Joseph probably had died before Jesus entered public ministry.

Joseph is the patron saint of the dying because, assuming he died before Jesus' public life, he died with Jesus and Mary close to him, the way we all would like to leave this earth.

We would like to offer for your meditation a few excerpts from Pope Francis's meditation of the fatherhood of St. Joseph. In his letter, The heart of the Father, (Patris Corde), he sets St. Joseph as an example to both people called to marriage and to priesthood. He emphasises the love and obedience of Saint Joseph. Saint Joseph was a true head of the household, yet he used his authority to care and not to domineer:

"Saint Paul VI pointed out that Joseph concretely expressed his fatherhood “by making his life a sacrificial service to the mystery of the incarnation and its redemptive purpose. He employed his legal authority over the Holy Family to devote himself completely to them in his life and work. He turned his human vocation to domestic love into a superhuman oblation of himself, his heart and all his abilities, a love placed at the service of the Messiah who was growing to maturity in his home”." 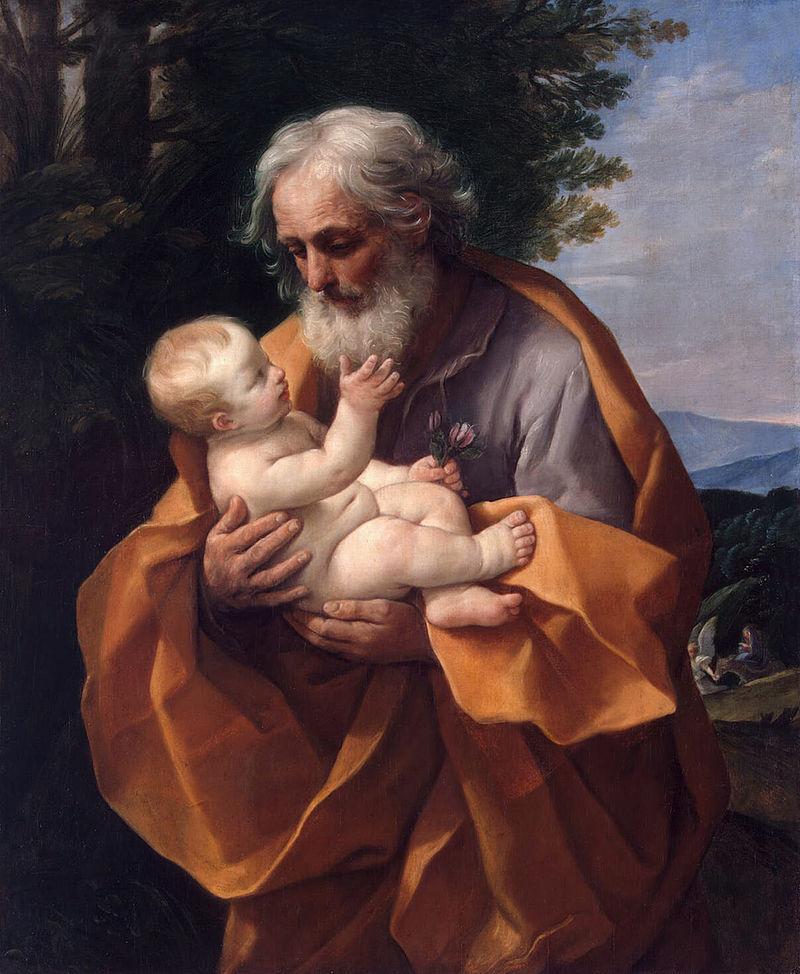 "Even through Joseph’s fears, God’s will, his history and his plan were at work. Joseph, then, teaches us that faith in God includes believing that he can work even through our fears, our frailties and our weaknesses. He also teaches us that amid the tempests of life, we must never be afraid to let the Lord steer our course. At times, we want to be in complete control, yet God always sees the bigger picture."

He points out, how Joseph's life certainly did not go according to his plan in many ways, yet he was not resentful about it:

"Often in life, things happen whose meaning we do not understand. Our first reaction is frequently one of disappointment and rebellion. Joseph set aside his own ideas in order to accept the course of events and, mysterious as they seemed, to embrace them, take responsibility for them and make them part of his own history. Unless we are reconciled with our own history, we will be unable to take a single step forward, for we will always remain hostage to our expectations and the disappointments that follow.

The spiritual path that Joseph traces for us is not one that explains, but accepts. Only as a result of this acceptance, this reconciliation, can we begin to glimpse a broader history, a deeper meaning. We can almost hear an echo of the impassioned reply of Job to his wife, who had urged him to rebel against the evil he endured: “Shall we receive the good at the hand of God, and not receive the bad?” (Job 2:10)"

He also emphaises the importance of courage, which is a virtue really needed in today's world:

"Just as God told Joseph: “Son of David, do not be afraid!” (Mt 1:20), so he seems to tell us: “Do not be afraid!” We need to set aside all anger and disappointment, and to embrace the way things are, even when they do not turn out as we wish. Not with mere resignation but with hope and courage. In this way, we become open to a deeper meaning. Our lives can be miraculously reborn if we find the courage to live them in accordance with the Gospel. It does not matter if everything seems to have gone wrong or some things can no longer be fixed. God can make flowers spring up from stony ground. Even if our heart condemns us, “God is greater than our hearts, and he knows everything” (1 Jn 3:20)."

Finally, he talks abnout deep true gift of oneself, that is at root of every vocation, and of impotance not to use our children as our own self-fulfillment:

"Joseph found happiness not in mere self-sacrifice but in self-gift. In him, we never see frustration but only trust. His patient silence was the prelude to concrete expressions of trust. Our world today needs fathers. It has no use for tyrants who would domineer others as a means of compensating for their own needs. It rejects those who confuse authority with authoritarianism, service with servility, discussion with oppression, charity with a welfare mentality, power with destruction. Every true vocation is born of the gift of oneself, which is the fruit of mature sacrifice. The priesthood and consecrated life likewise require this kind of maturity. Whatever our vocation, whether to marriage, celibacy or virginity, our gift of self will not come to fulfilment if it stops at sacrifice; were that the case, instead of becoming a sign of the beauty and joy of love, the gift of self would risk being an expression of unhappiness, sadness and frustration.

When fathers refuse to live the lives of their children for them, new and unexpected vistas open up. Every child is the bearer of a unique mystery that can only be brought to light with the help of a father who respects that child’s freedom. A father who realizes that he is most a father and educator at the point when he becomes “useless”, when he sees that his child has become independent and can walk the paths of life unaccompanied. When he becomes like Joseph, who always knew that his child was not his own but had merely been entrusted to his care. In the end, this is what Jesus would have us understand when he says: “Call no man your father on earth, for you have one Father, who is in heaven” (Mt 23:9)."