Our Lady of the Angels, Patroness of Costa Rica, visiting our Church

Starting Sunday, the 8th of September and until the 22nd, the icon of Our Lady of the Angels, Patroness of Costa Rica is going to be present in our parish. It is a great opportunity to think deeper about our devotion to Virgin Mary. 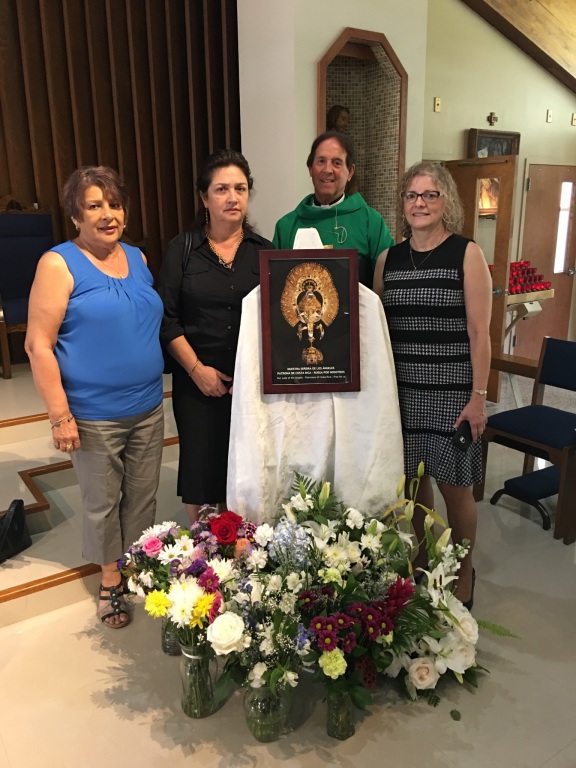 Here is the story of this famous icon.

In the city of Cartago, as in many others during colonial times, whites were segregated from Indians and mestizos. Those who were not absolutely white were not allowed to enter the city, where a stone cross marked the limits. On August 2, 1635, Feast of the Holy Angels, a poor mestizo woman named Juana Pereira, in her daily search for firewood, discovered a small image of the Virgin simply carved on a dark stone, placed conspicuously by the footpath. Juana happily picked up the treasure, with no idea that she would find it five more times in the same place, because the image kept disappearing from the cupboards, chests and even the parish tabernacle, and on each occasion would return to the same rock where it had been found. It was evident to all that the Virgin wanted a center of prayer, where she could give her love to the poor and humbled ones.
The image of Our Lady of the Angels is very small, only about eight inches high. She carries the Child on her left arm, where the cloak that covers her from the face down, is gathered in pleats. She has a round, sweet face, slanted eyes and a delicate mouth; her coloring is leaden, with scattered golden sparkles. Only the faces of Mary and the Child Jesus are visible, as a precious cloak protects and adorns her. At present the statuette is displayed in a handsome monstrance which surrounds it completely, enlarging its appearance.
“La Negrita” (the little black one) as she is affectionately called by the people of Costa Rica, was solemnly crowned in 1926 and in 1935, His holiness Pope Pius XI declared the beautiful shrine of the Queen of Angels a Basilica.
Pilgrims visit Cartago constantly to pay their respects to their heavenly Mother; many enter the shrine on their knees, as an act of humility and gratitude, and then they pray at the rock where the blessed image was found. The stone is wearing away under the constant rubbing of so many pilgrims’ hands that caress it gratefully while they pray for relief of their sufferings.
There is a spring under the stone and its waters are collected by the faithful who visit the shrine seeking mercy and health.