25th of July our Church remembers Saint James the Greater. Let`s look at what we know about this great Apostle

“He walked along a little farther and saw James, the son of Zebedee, and his brother John. They too were in a boat mending their nets. Then he called them. So they left their father Zebedee in the boat along with the hired men and followed him” (Mark 1:19-20). 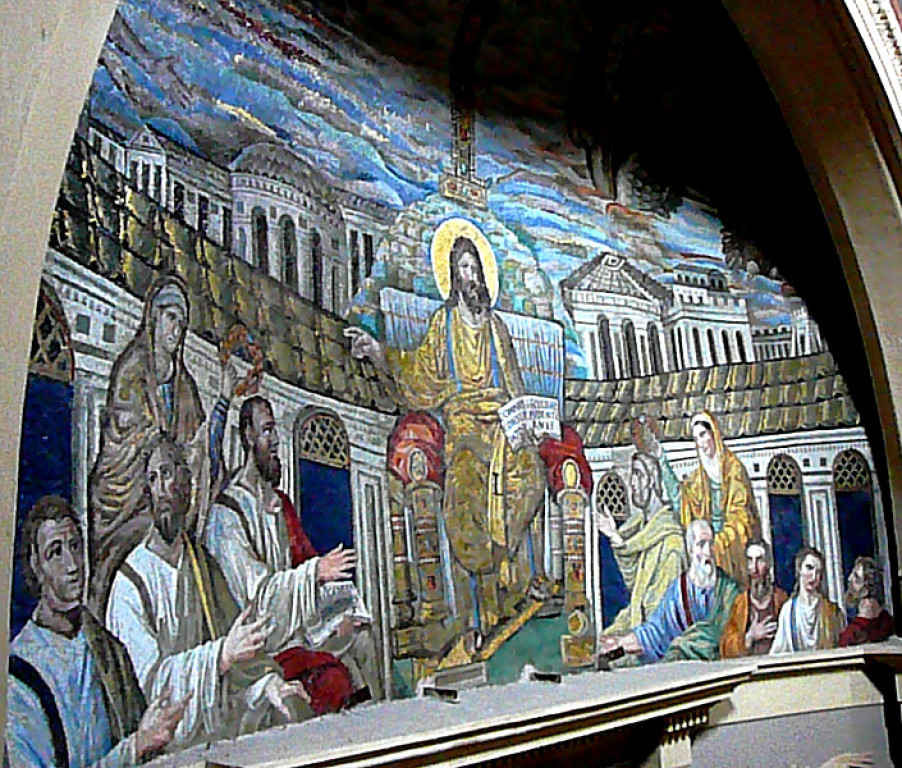 “Six days later Jesus *took with Him Peter and [a]James and John his brother, and *led them up on a high mountain by themselves. 2 And He was transfigured before them; and His face shone like the sun, and His garments became as white as light. 3 And behold, Moses and Elijah appeared to them, talking with Him. 4 Peter said to Jesus, “Lord, it is good for us to be here; if You wish, I will make three [b]tabernacles here, one for You, and one for Moses, and one for Elijah.” 5 While he was still speaking, a bright cloud overshadowed them, and behold, a voice out of the cloud said, “This is My beloved Son, with whom I am well-pleased; listen to Him!” 6 When the disciples heard this, they fell [c]face down to the ground and were terrified. 7 And Jesus came to them and touched them and said, “Get up, and do not be afraid.” 8 And lifting up their eyes, they saw no one except Jesus Himself alone.”(Matthew 17:1-8)

Raising to life the Daughter of Jairus

51 When He came to the house, He did not allow anyone to enter with Him, except Peter and John and James, and the girl’s father and mother. 52 Now they were all weeping and lamenting for her; but He said, “Stop weeping, for she has not died, but is asleep.” 53 And they began laughing at Him, knowing that she had died. 54 He, however, took her by the hand and called, saying, “Child, arise!” 55 And her spirit returned, and she got up immediately; and He gave orders for something to be given her to eat. (Luke 8: 51-55)

The Agony in Gethsemani

36 Then Jesus *came with them to a place called Gethsemane, and *said to His disciples, “Sit here while I go over there and pray.” 37 And He took with Him Peter and the two sons of Zebedee, and began to be grieved and distressed. 38 Then He *said to them, “My soul is deeply grieved, to the point of death; remain here and keep watch with Me.”(Matthew 26:36-38) 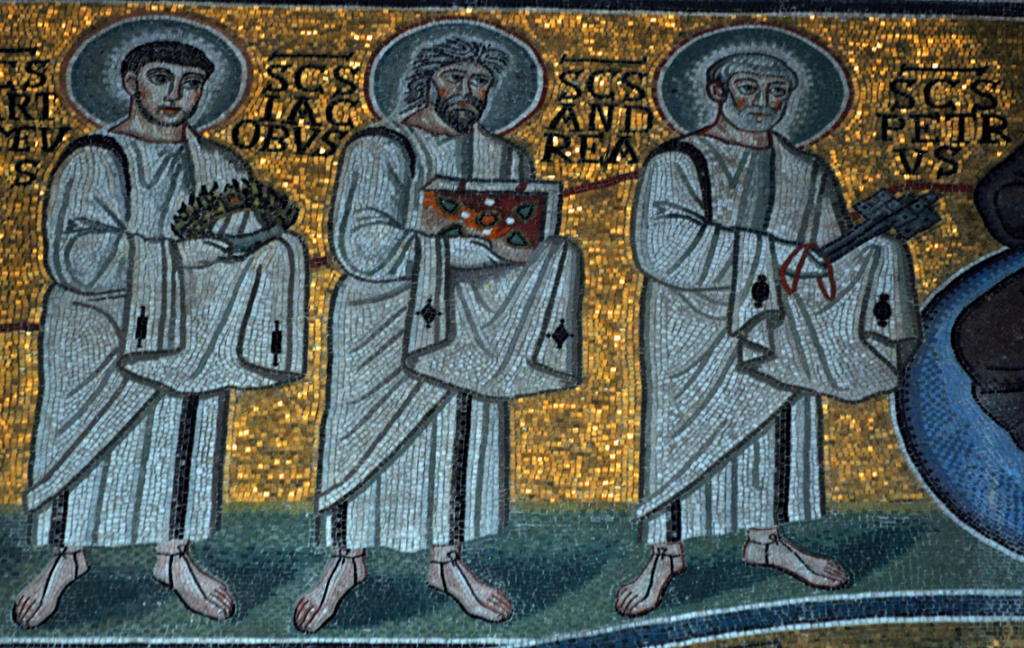 20 Then the mother of the sons of Zebedee came to [m]Jesus with her sons, bowing down and making a request of Him. 21 And He said to her, “What do you wish?” She *said to Him, “Command that in Your kingdom these two sons of mine may sit one on Your right and one on Your left.” 22 But Jesus answered, “You do not know what you are asking. Are you able to drink the cup that I am about to drink?” They *said to Him, “We are able.” 23 He *said to them, “My cup you shall drink; but to sit on My right and on My left, this is not Mine to give, but it is for those for whom it has been prepared by My Father.”(Matthew 20: 19-23)

Of course, other apostles were not happy about it and Jesus used this episode to give everyone a lesson on humility.

“51 He was determined to go to Jerusalem; 52 and He sent messengers on ahead of Him, and they went and entered a village of the Samaritans to make arrangements for Him. 53 But they did not receive Him, because He was traveling toward Jerusalem. 54 When His disciples James and John saw this, they said, “Lord, do You want us to command fire to come down from heaven and consume them?” 55 But He turned and rebuked them… (Luke 9, 51-56) 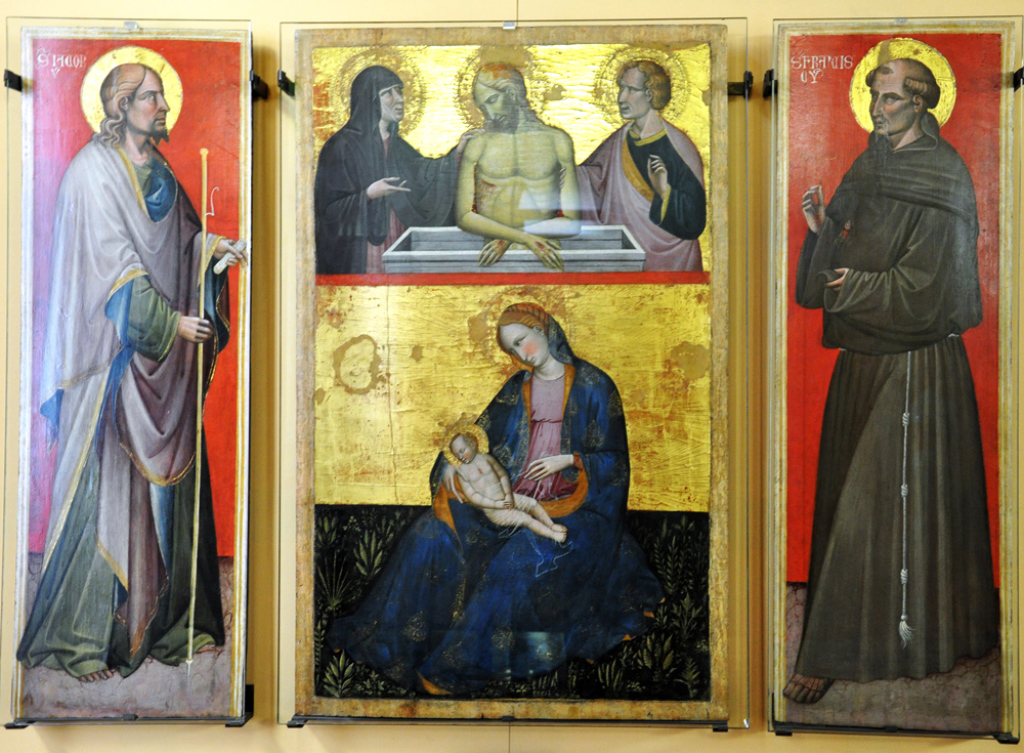 On the left St. James the Greater holds his pilgrim's staff and a small scroll. On the right is St. Francis of Assisi: tonsure, Franciscan habit with thrice-knotted cord, stigmata showing on his right hand and through the rip in his habit. Both are labeled with their names in Latin.

“About that time King Herod laid hands upon some members of the church to harm them. He had James, the brother of John, killed by the sword, and when he saw that this was pleasing to the Jews he proceeded to arrest Peter also” (Acts 12:1-3a)